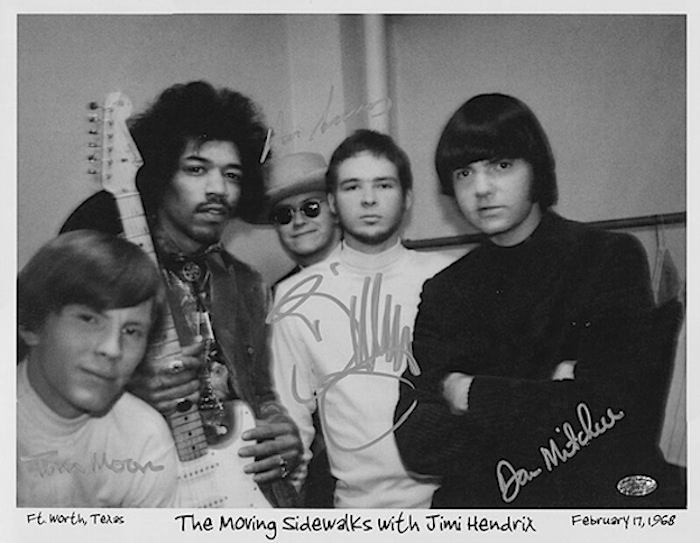 ZZ Top guitarist Billy Gibbons was lucky enough to spend some time with the late great Jimi Hendrix back in 1968. At the time, Gibbons’ psychedelic band, the Moving Sidewalks, had a chance to open for Hendrix on his first headlining U.S. tour.

In addition to the memories, Gibbons got a very special gift out of the tour: a pink Strat, given to him by Hendrix.

While Hendrix has certainly been celebrated for his visionary guitar work over the past decades, in a new interview with Total Guitar, Gibbons reveals the one thing he thinks Hendrix doesn’t get enough credit for: his innovative use of the pickup toggle switch.

“Jimi took the three-way toggle switch into five-way,” Gibbons says. “He’s the one that discovered the in-between positions, and in order for that not to pop out of place, he showed me how to take off the back scratch plate and remove the spring within the toggle switch, so it would more or less stay in place! And that sound had this extra chimeyness to it.

“I don’t think he was credited enough for that. There were lots of little things about him, and all very important to how we see the Stratocaster or even the instrument in general through his applied skills.”

As for the pink Strat, Gibbons says, “This is the first five-way toggle switch that I ever saw. He took the springs off the standard switch so that it just hung there. When he wanted to move it out-of-phase, Jimi’d shake the guitar until the switch moved, smooth as can be, into the position.”

As many others have noted, Hendrix was shy and soft spoken, a complete departure from what people who saw his incendiary performances might have assumed.

“Offstage he was, quite surprisingly, somewhat of a shy character,” Gibbons confirms. “You could say he was almost a retiring person… until you put a guitar in his hands. And when he stepped into the light, it was a different story altogether. He became a showman and a guitar pyrotechnics extraordinaire. He was doing things with his Fender Stratocaster that certainly the designers never intended.

“Through his genius, the invisible became instantly visible. I took those late-night lessons right into the early days of ZZ Top to the present. And I suppose you could say, with all that backstage carousing in those days… well, not a moment was lost!”

Below we’ve included videos of the Jimi Hendrix Experience performing “Foxey Lady” at Miami Pop in 1968. We’ve also included the Moving Sidewalks’ cover of the Beatles’ “I Wanna Hold Your Hand.” Wild stuff from the heyday of the psychedelic era.