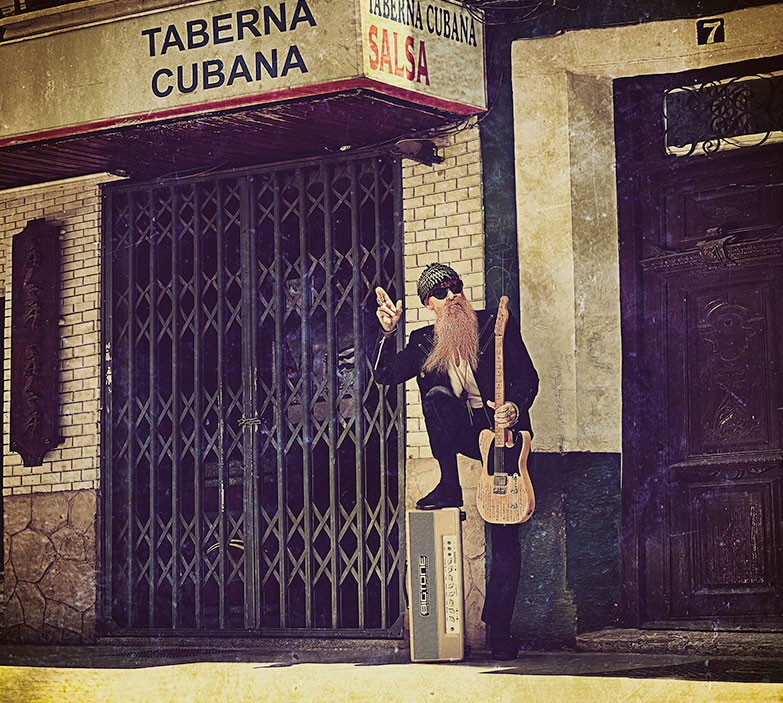 The coolest thing about having a nearly 50-year career is that you can experiment all you want, and that’s exactly what ZZ Top continues doing since forming up their ferocious hard rock trio in Houston, Texas back in 1969. One of the most enduring bands in American history, ZZ Top has always drawn from a long list of influences — from BB King (co-frontman Billy F Gibbons’ idol since he met the legend at age seven) to modern hip-hop artists based in Houston, like DJ Screw, who influenced the band’s last release, La Futura. ZZ Top even reinterpreted the track “25 Lighters” by DJ DMD and rappers Lil’ Keke and Fat Pat for the record. Before ZZ Top, Gibbons learned percussion from the Mambo King, Tito Puente, who inspired last year’s Latino-laced solo LP, Perfectamundo. Gibbons went on to play psych rock in the ’60s as frontman of the Moving Sidewalks, and their music was not unlike the kind of sounds created at that time by fellow Houston act, 13th Floor Elevators, with Gibbons even giving his friends a nod with a track entitled “99th Floor”.

It’s that range of garage rock, blues, mambo, and hip-hop that has made ZZ Top’s long ride an intriguing one, and, thankfully, they’re still doing whatever they dang well please, including releasing a song in space. I mean, c’mon — not even David Bowie thought of that.

Here’s what Gibbons had to say about dropping singles in outer space, the Houston hip-hop scene, and keeping a band together for nearly half a century.

We know that BB King influenced your style — what other influences had a lasting impact on you and ZZ Top?

Billy F Gibbons: BB certainly heads up the rather long and lengthy list of inspiring individuals within the lofty realm of showbiz. My dad took me to one of the famed recording studios in Houston way back as a kid of just seven or eight, where BB and company were on full tilt making killer blues sounds, leaving a long-lasting impression on me, to say the least. The great man and his guitar. Yes! And, there’s Jimi Hendrix. Jimi was a true friend who showed us what the electric guitar could do, far beyond what its inventors would have had in mind. And, of course, then there’s Lightnin’ Hopkins, a hero of the Houston ghetto with style and swagger on “10.” Muddy Waters? Check! Jimmy Reed? Check! Freddy King? Yes! Albert King? Of course! Howlin’ Wolf? Certainly! The list goes on and on.

How do you keep a band together for 47 years?

BFG: By staying apart. This band gives each other lots of space, and yet we’re always ready to get together and make loud noise. The gathering to make TV appearances, recording studio sessions, stage calls, and show dates become all the more inviting, something we all look forward to. The fact that we’re an odd number (some say a very odd number) evens the field as there’s nary a tie vote.

DJ Screw was a major influence on ZZ Top’s most recent studio recordings. How did you get acquainted with his work, and how did he inspire your own?

BFG: We encountered the absolute best in and around the vast array of artists from the Houston crew, including DJ Screw, Bushwick Bill, Scarface, The Geto Boys, Manny Fresh, Juvvy, the Cash Money crowd, Beyonce — all at the now infamous shop of super sound known around as John Moran’s Digital Services. That was a studio we frequented back in the ’90s. There was some downhome cross-pollinization happening and, not surprisingly, the extended exchanges between us all brought an intimate familiarity with the chopped and screwed phenomenon.

I love that ZZ Top reinterpreted “25 Lighters.” Obviously, hip-hop has played a part in your creativity in recent years. Tell me more about that.

BFG: We devised our version, while pressed with some in-house affiliations, leading the track to officially become “a derivative work” titled as, “I Gotsta Get Paid”. Although we did take an immediate liking to the original back in the ’90s, it took us about 15 years to figure how turning it into a guitar-rock piece could work. Now we know. And it’s all a groove and truly one of our favorites.

Did you really release a song in space?

BFG: Yes, the track from La Futura titled “Flying High”, co-written by Gibbons’ guitar thrasher pal in California, Austin Hanks, [yes, that’s his real name!], made it aboard the rocketship making way to the International Space Station. Coming from the home of NASA, the band can attest that “space is the place.”

BFG: Tito displayed with ultimate tasteful talent how rhythm, placed in the frontside, was effective in moving the backsides. He taught us a valuable lesson: “play what you want to hear.”

I love the Moving Sidewalks and the band’s nod to the 13th Floor Elevators. Do you still keep in touch with [frontman] Roky Erikson?

BFG: Yes, we have the occasion to join Roky Erickson on stage every year or so out and about in Austin and then on around the world, actually. Roky’s demeanor is seriously cool, and his delivery remains fierce. Certainly one of the greatest innovators of all time. Roky and the 13th Floor Elevators have influenced many including our friends in the group Surprise Vacation. The impact of what Roky does remains staggering.